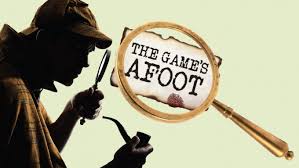 “The Game’s Afoot gives you everything you love about great live theatre. Billed as a comedy thriller you will find yourself swept along for a wild and funny ride.” – Cleveland Fine Arts Examiner

Winner! 2012 Mystery Writers of America Edgar Allen Poe Awards – Best Play!
It is December 1936 and Broadway star William Gillette, admired the world over for his leading role in the play Sherlock Holmes, has invited his fellow cast-members to his Connecticut castle for a weekend of revelry. But when one of the guests is stabbed to death, the festivities in this isolated house of tricks and mirrors quickly turn dangerous. Then it’s up to Gillette himself, as he assumes the persona of his beloved Holmes, to track down the killer before the next victim appears. The danger and hilarity are non-stop in this glittering whodunit set during the Christmas holidays.

“An inspired whodunit…a snappy, clever drawing-room mystery. There are twists in playwright Ken Ludwig’s The Game’s Afoot that cause the audience to gasp.” – The Cleveland Plain Dealer

“The play evolves like a mystery thriller, as one tantalizing clue leads to another….In 1936, at the height of the Great Depression, people flocked to the theater for a few hours of escapism from hard times. Today, in our current recession, here is an antidote and the ideal holiday present – the gift of laughter.” – Cleveland Jewish News

“Ludwig demonstrates the theatrical equivalent of perfect pitch, both in this new work and in his past efforts.” – Cleveland Scene

“From the intriguing opening mini play within a play to the surprise last scene a split second before final curtain, The Game’s Afoot gives you everything you love about great live theatre. Billed as a comedy thriller you will find yourself swept along for a wild and funny ride.” – Cleveland Examiner

“A hilarious, quirky and thrilling alternative to your standard holiday entertainment. The Game’s Afoot is the perfect gift for the holidays..a fantastically fun night out at the theatre. It’s something we can be proud of as a city” – ClueintoCleveland.com

“The Game’s Afoot will be performed by professional and community theaters across the country. Certainly this production is Broadway quality.” – TalkinBroadway.com